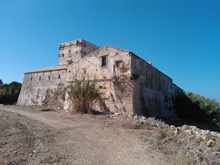 They are two small islands in the Mediterranean Sea, 72 miles both from Zakynthos and the Peloponneso Coast.
The smaller one is Arpia and the bigger one Stamfani; they are both flat and the highest ill is 20 metres above the sea level.
The coasts of the two islands are rocky without sand.
The Strofades are popular for their beauty, for the rich vegetation and for the passage of more than thousands of migratory birds every year.
In the past the islands were counted among the most fertile of Greece, there were orchards producing such a big quantity of fruits to satisfy the needs of the more than one hundred monks that used to live there.

Nowadays there still are some fruit trees like orange and lemon trees, fig trees and a thick wild vegetation all around the island.
There are more than 250 different trees and flowers specimen among which the most widespread is the secular cedar of which there is a thick wood. 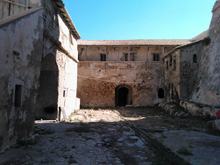 The Strofades are part of the marine park since more than 1200 different specimen of migratory birds go there to nest and rest every year from Africa; among the different specimen there are turtledoves, cuckoos, goldfinches, hoopoes and swallows. 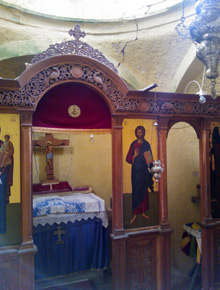 In addition to being the abode of different animal and vegetal specimen there is also one monk living in this paradise.
There is the monastery of the Blessed Mother of God, built around the 1200 upon request of Princess Irene, daughter of the Nicea Emperor who, thanks to those islands, survived a shipwreck.
The monastery is a fortress that in the centuries survived nature and buccaneers that assaulted and sacked it more than once and now presents the first signs of yielding with cracks and walls ruined by time and wear.
In the past many monks used to live there and among them there was Saint Dionisios the modern protector of Zakynthos island and to commemorate the past times there are Byzantine icons, chandeliers, embroidering and some sculptures like the biceps eagle, symbol of the Byzantine Empire.