Artemis, goddess of hunting, used to wander around the green woods of Zakynthos whereas her brother Apollo used to play the lira under bay trees to chant the beauty of the island.
The cult and devotion, in archaic era, to Artemis and Apollo resulted in the organisation of entertainments and competitions among the islanders.
News about the island founder are from Homer and concern Zakynthos, son of Dardanus, King of Troy, who leaving with his fleet from the city of Psofida, reached the island and founded his Acropolis.
Zakynthos, as island founder, is represented in various coins and symbol of the entire island. In the symbol Zakynthos is holding a snake since, according to some legends, he freed the island from snakes.
There is also another theory according to which the Arcades, in the first millennium before Christ, reached the island with the intention of founding new colonies and to confirm those origins there is the prove of the inhabitants’ talent for music and the cult of the goddess Artemis typical of Arcadia. The Arcades also founded, along the Spanish coast, the colony of Zakanta which prospered for more than one thousand years till 218 B. C. when destroyed by Hannibal. Later on Zakynthos passed under the domain of Arkisios, king of Kefalonia, and was under the power of Ulysses, king of Itaca.
Together with the other lands ruled by Ulysses, Zakynthos took place to the war of Troy with twelve war vessels, war quoted by Homer in the Iliad.
After the war of Troy with Ulysses come back to Itaca, there was the legendary slaughter of Penelope’s pretenders among whom there were twenty young people from Zakynthos.
This mythological event, told by Homer in the Odyssey, seems to refer to a rebellion in the Ionian Islands that put an end to Ulysses’ power and to the issue of a particular treaty in which for the first time was approved the right to a democratic government.

Before the Romans domination, Zakynthos remained neutral to the Persians Wars and was with the Athenians during the Peloponnesos War and next was subdued by the Macedonians. The first real and historical conquerors were the Romans that considered Zakynthos a strategic place for the development of the trades and the expansions of their conquests.
The islanders didn’t accept the Roman hegemony and tried numerous rebellions ending with the arrival of the admiral Fulvius in 150 B.C. who imposed to the habitants the law of Rome. With the time both Romans and Zakynthos’ inhabitants improved their cohabitation accepting reciprocal obligations and concessions up to the point that joining their forces in 87 A.C. they managed to stop an invasion from Mitridates.

After the Roman Empire fall, Zakynthos, the Ionian islands and the colonies along the western Mediterranean coast underwent decades of uncertainty with many invasions from Constantine the Great and with the annexation of the island to the province of Illiria, a new historical period, characterized by stability and social rebirth, started.
During the Byzantine domain, in addition to the Christian Era, the islanders were classified into three different social classes.
The most important class was the landowners one, tradesmen and workers belonged to the middle class and the peasants to the lower social class.

In 1185 with the progressive decline of the Byzantine empire, Zakynthos island faced an interregnum of the duration of three centuries in which the Orsini, the Angioini and the Tocchi succeeded one another.
Under the latter dynasty Zakynthos managed to enlarge the borders of its county conquering part of the continental Greece improving both the economic administration and the organization up to the extent to interest the Venetians that in 1485 included Zakynthos to their provinces.
From 1492 the Venetian Government started a campaign to transfer many Venetians citizens to the province of Zakynthos granting a period of rebirth and prosperity of the island.
The harmonic cohabitation between the two populations in that period was exemplary mainly due to the Venetians wisdom that were able to maintain peace conditions giving to the islanders social and religious freedom.
In less than three centuries the Venetian domination allowed the island to flourish from both the cultural and architectonic point of view up to the extent that Zakynthos deserved the name of Florence of Greece.
The French liberal ideas in the XVIII centuries, spread in the whole Europe and reached Zakynthos that greeted them with great enthusiasm.


The French and Russian-Turkish Domination

After the fall of the Venetian Republic Zakynthos island was subjected to the democratic French; in the main square the noble coat of arms were burned down and Zakynthos became the administrative head quarter of the Ionian islands.
The freedom and innovation brought by the French collided very soon with the nostalgia of the noble class for its old privileges and it was the nobles entourage that in 1798 favoured the coming of the alley between Russians and Turkish.
On march 22, 1800 in Costantinopolis Russia and Turkey agreed to found the State of the Ionian Islands where for more than seven years the old nobles entourage managed to impose itself upon the population.

In 1809 the British settled in Zakynthos with a big army and made it the capital of the Ionian State. The first advantages from the British were public assistance and the institution of the first typography of the island.
All those benefits vanquished with the arrival of T. Maitland, the new governor of Zakynthos.
He was an authoritative tyrant up to the extent that the population, after some protests towards the British government, founded a secret patriotic society named “Filikì Eteria”.
The society was behind the Greek national insurrection and in Zakynthos there is a stele commemorating the patriots. 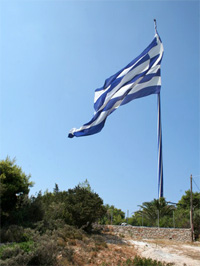 Greece independence from Turkey was the reason of the birth of a radical movement in the Ionian Islands that fought long against the British in order to join Greece and being free from foreign power.
Zante and the Ionian Islands joined Greece in 1864 year in which the Greek flag was raised.

As the rest of Greece even Zakynthos was subdued to the Italian and German occupation during the II World War, and a resistance front against the invaders came to life.
After the war the island had another big shock in 1953: an earthquake destroyed the entire city. The ancient and beautiful buildings were razed and nothing remained of the different domination that succeeded one another on the island.
Thanks to the help of the government and the goodwill of the citizens the city was slowly and entirely rebuilt.