Some ancient ruins, wall paintings in the churches of the Byzantine period and ancient coins testify the flourish past culture of the island.
Art and literature started from the 15th Century under the Venetians domination that permitted the birth of a rich culture in contrast with the rest of Greece that under the Turkish domination was facing one of its darkest historical periods.

Literature origins dated back to the 15th Century when the island poets were popular for their poems, prose, and the translation of texts from ancient Greek to the spoken language.
In the following Century Zakynthos strongly contributed to the Greek literature and art by founding the first Greek Academy and with characters such as Martelaos, Foscolo’s teacher, Gouzelis and Solomos and Matesis, playwrights considered the forerunners of the modern Greek theatre.
Among the most popular poets of the XIX centuries there are Foscolo, Italian language, Kalvos, whose sentence “Freedom requires virtue and audacity” is quoted in the symbol of the city of Zante and Dionisio Solomos to whom a church and a square have been dedicated.
Solomos studied in Italy and wrote poems in Italian, then came back to Zakynthos, his homeland, where he wrote poems to sustain the population during the war against the Turkish domination; among his works some lyric compositions of the modern Greek literature.
Kalvos and Solomos' mortal remains are at the museum that has been dedicated to them.

Dionysios Solomos
Dionysios Solomos is the most important Greek poet of the 19th century, but also one of the greatest of all time. The creator of our National Anthem was also the founder of a whole school of poetry, Ionian, as well as a man who appropriately and creatively utilized the folk language and succeeded in introducing it into literature.
Our great Zakynthian poet always inspires all the later poets after him, leaving an important stock which deserves to be listed with the great Greeks.
It is worth looking at some important information about his life.
He was born in Zakynthos in 1798 as his father's extramarital child with a maid.
Nikolaos Solomos, the father of our great poet, recognized both himself and the second son he had with her, as his own children.
Apart from Hymn to Liberty, our national anthem, Salomos' top works are considered the Cretan, the Free Siege, the Lambros. Even more curious is that none of the projects are complete, except for our national anthem, everything else is unfinished.
Costa Varnalis' phrase about himself: "... (Solomon) always wrote them, but he didn't write his drinks."
Although he spoke Greek with his mother, Solomon's education was mainly Italian. In 1808 he began his studies in Italy, where he remained for ten years, attending Cremona High School in Venice and the Law School of Pavia.
In 1828 he settled in Corfu, the place where he lived until his death. Corfu at that time was a great spiritual center that would inspire him to create, despite the fact that his psyche had been shaken by a series of disputes with his brother on matters of property.
The first poems of our great poet are written in Italian language and are of theological content.
The Solomos Circle was surrounded by great personalities of the time, such as Nikolaos Mantzaros, Andreas Laskaratos, Jacob Polylas.
Our great poet died of a stroke in February 1857.
The great poet always inspires and remains one of the most important spiritual figures in our country.

The first affects in painting came from Byzantine art.
The first painters dedicate themselves to religious themes representing holy icons in churches and utilizing the technique of egg tempera on wood. 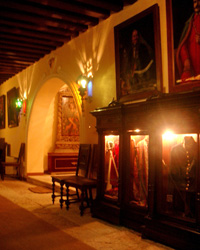 In the 17th Century thanks to Doxaras the painting technique changed into the oil on canvas one with portraits and perspective drawings.
Another important painter was Koundounis belonging to the Filikì Eteria and he painted pictures with nationalistic and not only religious messages.
Tsakos too is to be remembered for his pictorial quality and precision in the portraits details.
In the 19th Century painting partly changed its connotation; it is not only a holy form of art to be exposed in churches but it starts being a form of art for everyone to be admired also in one’s own house. In this period Pelekasis was very important, an internationally acclaimed painter for his landscapes, portraits and icons that have been exposed in museums.

In the 18th Century the art of the silver engraving and of the wooden sculpture developed and the works were exhibited and admired especially in churches.
G. Bafas was a well known silver engravers and a sample of his works can be admired in San Dionisio church.
Among the wooden engraver there were the brothers Vlachos who decorated many churches and houses but their works were destroyed during the earthquake in 1953; Stefanos Xenopoulos is to be remembered too for his specialisation in the mosaic art.

In the city of Zakynthos before the earthquake there were elegant buildings, bourgeois and common houses so as many churches.
The Venetian influence favoured the construction of public buildings, roads and bridges that improved the city asset and between 1840 and 1870 many neo-classical buildings were constructed showing the combination of Venetian and baroque style.
This neo-classic style emerges in the design of some churches too.
With the earthquake and the following fire in 1953 the largest part of the city was destroyed and with it the beauty of the past civilization.
The reconstruction is not always close to the original destroyed buildings and it was not possible rebuild from the ashes a whole city keeping the beauty and the charm that only old people remember.

The use of musical instruments, at the beginning to accompany the military parades, made it possible for the islanders in the course of the centuries to intone ballads to accompany the folk feasts.
In spite of the Venetian influences (Zakynthos Serenade) and the Cretan ones (Arekia), since ancient times the islanders developed their one form of music that had their best moment with the institution of the Zakynthos School of Music in 1815 and in the following years of choirs and music clubs.
It is possible to find the musical tradition both in the ecclesiastical and folk music whose most famous expression is the sirtaki an ancient and lively ball accompanied by folk songs narrating about love and marriage.

Another important form of art is the theatre both as a moment of mutual feast and as moment of folklore whose historical roots go back to the period of Venetian domination.
At the beginning the representations were held in the nobles parlors and were considered something only for the well to do classes; during the last years of the Venetian domination a theatre was built to host for the first time also the lower classes.
The two genders that developed with more success were the opera and the so called “omelies” folk representations denouncing the social injustices whose subject were the lower classes.
In those works the most common theme was the contrast between the rich and the poor and the actors used to wear a mask to keep themselves anonymous.

During the stormy history of the island and after the numerous invasions that the inhabitants underwent, many folk traditions were born and were mainly connected to the religious cult that united the islanders against the conquerors. During the centuries, the religious folk feasts whose tradition is still alive, were a moment of community and amusement in particular for the lower social classes who were not admitted to other forms of entertainment.
Nowadays there are many folk feasts and tens of towns, small and large, get animated with colours and lights.
Among the most important feasts there are the Saint Dionisios, the Carnival and the Easter ones. 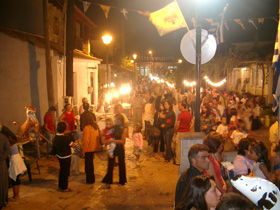 Saint Dionisios: it is the religious feast for the Saint protector of the island.
It is on August 24 but in the city of Zakynthos the ferment starts a couple of days in advance to reach the apex the night of August 24 with a magnificent procession and fireworks.

Zakynthos’carnival is now very famous all over Greece for being magnificent and very merry.
The beauty of the carnival goes back to the Venetian time whose habits and importance became part of the islanders traditions when Zakynthos was still a colony of the republic of San Marco.
The carnival period is now a moment of collective feast of two weeks during which the inhabitants forget everyday works to organize the feast that calls thousands of visitors from all over Greece with masked balls; the carnival ends in the small square of San Marco with a ritual from the past: the mask funeral.

Easter in Zakynthos, like everywhere else in Greece is a very spiritual moment whose apex is during the solemn procession when the Byzantine icon of the Holy Mother of Chryssopigi is carried around the city streets up to San Marco square where at midnight the pope with a candle gives life to a chain of candles light that multiply to enlighten the entire square.
The two most important moments of Easter in Zakynthos are the lamb roasted in the square with folk dances and the nice tradition to paint in red boiled eggs that will be broken together with friends.

Nowadays the islanders live on tourism in the Summer months (May to October) and on agriculture in Winter. The most important agricultural production is olive oil, grapevine, citruses and raisins.

The olive oil produced in Zante is at the base of its economy and it is sold also to the tourists who after having tasted it in the Greek cousin, is fascinated by it.
The raisins production on the contrary was better developed in the past since more moneymaking than the olive tree but after the second world war the island lost its domain on the abroad market of raisins and decided to pass to other forms of farming.
Fishing and breeding represent a secondary step in the island economy.
Thanks to tourism a strong local handcraft has been developed concerning handy crafted products like carpets, clothes, embroidery that are sold to the tourist. It is possible to find those products in the northern part of the island villages where the time has stopped.